Submitter does not have a specimen
EDRR Status: Local expert notified

Seems to be some kind of home made float, it was covered with white mussels or clams, it had a chuck of bamboo in the webbing and I was worried that it was japanese 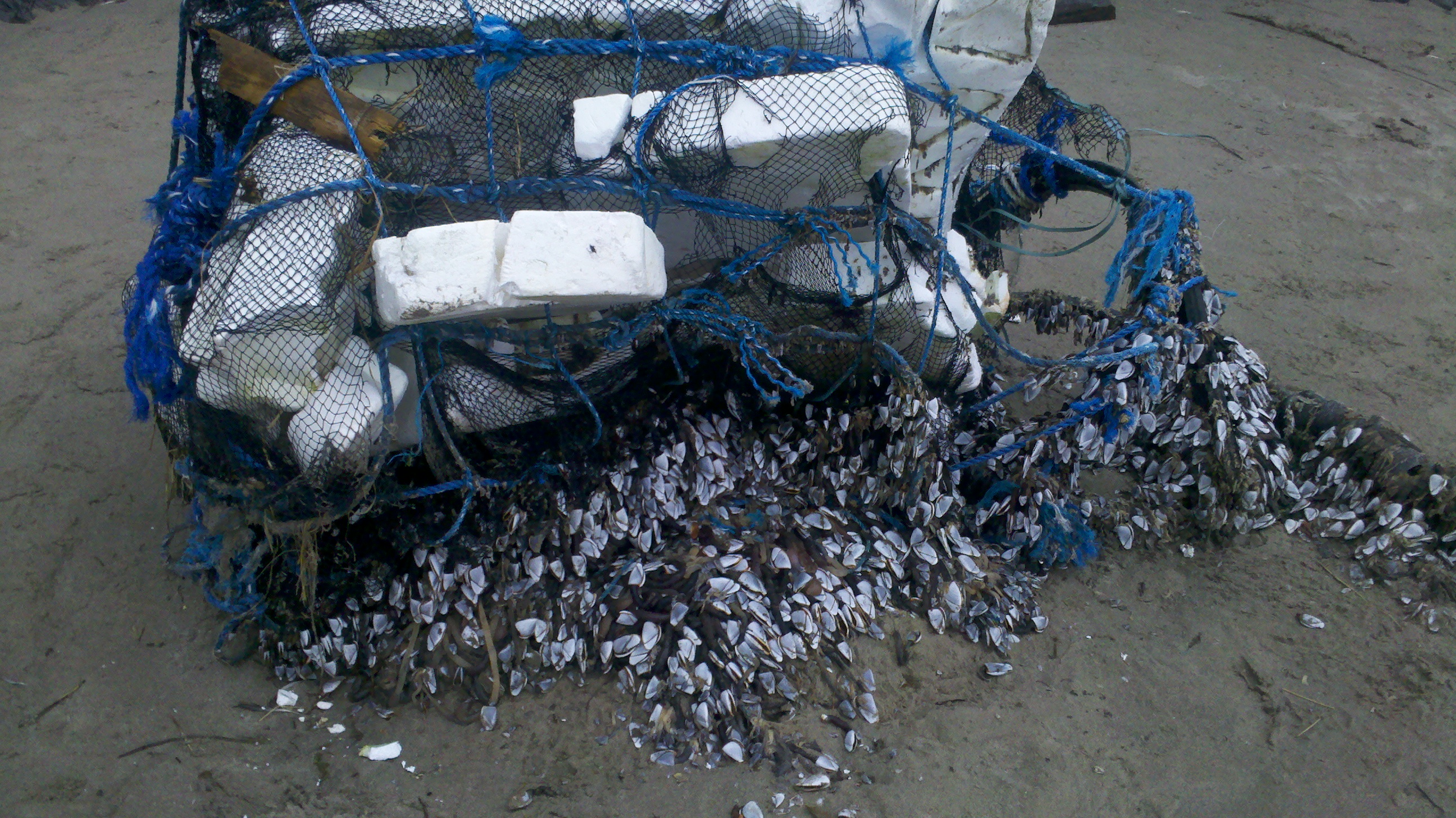 Thankfully, in this case, it looks like the organism colonizing the debris is a kind of Lepas, or goose-neck barnacle, which is native to the Oregon coast. A goodle search of "lepas" will display many pictures. Again, we really appreciate your report and that you took the time to notify someone. Please do keep looking for and reporting invasive species.

Also, as a precaution against further spread of potential invaders, we are asking people to leave any debris where they found it and not take it or transport it to another location.

Thanks again for doing the right thing and reporting suspicious debris. Feel free to contact me with any questions.

I shared your report with Steve Rumrill, Shellfish Program Leader at Oregon Department of Fish and Wildlife, and here is his response. This is valuable information for anyone who has questions about the risks associated with suspicious marine debris. Thanks again for your report!

Tania - Thanks for forwarding the report on potential marine invasive
species on the floating debris. I took a look at the photograph of the
marine debris (blue netting around Styrofoam with a piece of bamboo).
The majority of organisms appear to be the pelagic goose-neck barnacles
(Lepas anatifera). These Lepas barnacles are cosmopolitan throughout
the California Current (Alaska to Mexico and South America) and most
likely recruited to the floating debris during transit across the
Pacific. Here is the message (below) that distinguishes between "native
open-water species" like Lepas and the "non-native nearshore species"
like Undaria that are of great concern.


Most Marine Debris Does Not Carry Invasive Species:

* Floating debris that arrives along the Oregon coast often has
living organisms attached as hitch-hikers. Drifting debris that
normally washes ashore every day typically carries "native" open-water
or pelagic species that are not considered invasive and do not pose a
threat to shoreline communities.

* Examples of these open-water organisms that are regularly
found attached to floating debris include Pelagic goose-neck barnacles,
Lepas anatifera, Lepas fascicularis; Flotsam crabs, Planes major, Planes
marinus, etc. These organisms are specifically adapted to the open
ocean environment, and it is likely that they colonized the floating
debris a long distance away from the coastline of Japan. They are not
invasive along the rocky shores, subtidal reefs, sandy beaches, or
estuaries of the Oregon coast.

* Land-based items that were swept into the ocean by the
tsunami, such as bottles, cans, barrels, crates, packaging, building
materials, kitchen appliances, etc., are likely to have only the
non-invasive "native" open-water species that attached to the debris
while it was drifting across the ocean.
Only items that were floating in Japan's nearshore waters for extended
time prior to the tsunami are likely candidates as vectors for marine
invasive species (e.g., docks, buoys, boats, barges, aquaculture floats,
etc.).

Thanks again for sending the report!